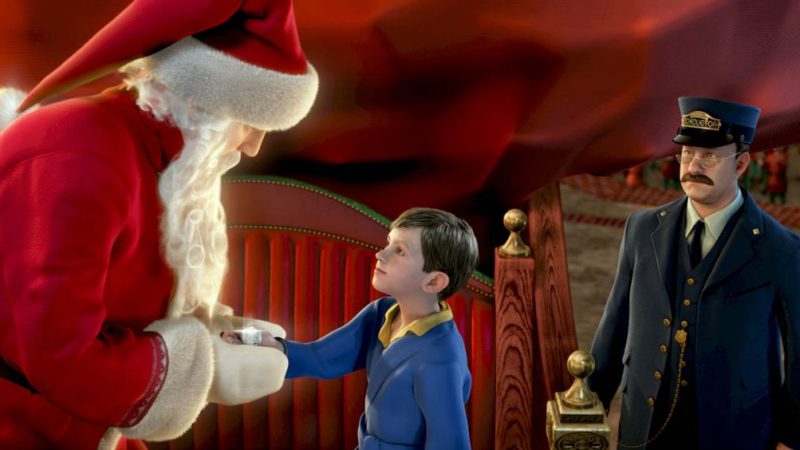 The 2004 film The Polar Express is based on the 1985 children’s book of the same name by Chris Van Allsburg. It is a story of a young boy who no longer believes in Christmas. A train going to the North Pole appears outside his house, and he boards it at the request of the conductor. He experiences an adventure with other children, and ultimately meets Santa Claus and becomes a true believer. The song “When Christmas Comes to Town” is sung by a boy and a girl on the Polar Express. The boy is disheartened because he hasn’t experienced Christmas, while the girl reassures him with depictions of the joyous parts of the holiday. The song for The Polar Express soundtrack was sung by Matthew Hall and Meagan Moore.

I’m wishing on a star
And trying to believe,
That even though it’s far
He’ll find me Christmas Eve.

I guess that Santa’s busy
‘Cause he’s never come around.
I think of him
When Christmas comes to town.

The best time of the year,
When everyone comes home.
With all this Christmas cheer
It’s hard to be alone.

Putting up the Christmas tree
With friends who come around.
It’s so much fun
When Christmas comes to town.

Presents for the children
Wrapped in red and green.
All the things I’ve heard about
But never really seen.
No one will be sleeping on
The night of Christmas Eve,
Hoping Santa’s on his way.

When Santa’s sleigh bells ring,
I listen all around.
The herald angels sing,
I never hear a sound.