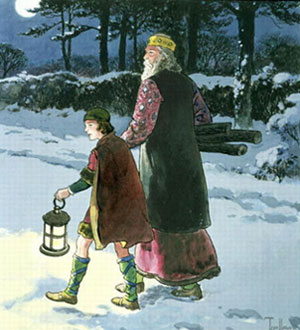 The Wenceslas of the song “Good King Wenceslas” wasn’t a king, but actually the Duke of Bohemia who lived in the 10th century. He was reputable as a good, kind, honest, and morally upright man. The carol is about Wenceslas and his page going out giving alms to a poor peasant in bitter cold weather on the Feast of Stephen, the second day of Christmas (December 26). Wenceslas was perhaps too good, because he was betrayed and murdered by his envious younger brother in 935. He immediately achieved sainthood status, and within a few decades, four biographies of him were in circulation.

The song is based on a 13th century springtime carol sung in Latin, “Tempus adest floridum,” or “It is time for flowering.” In 1853, John Mason Neale selected Wenceslas as the subject for a children’s song to illustrate Christian generosity.

Good King Wenceslas looked out
On the feast of Stephen,
When the snow lay round about
Deep and crisp and even.
Brightly shone the moon that night
Though the frost was cruel.
When a poor man came in sight
Gath’ring winter fuel.

“Hither, page, and stand by me.
If thou know’st it, telling
Yonder peasant, who is he?
Where and what his dwelling?”
“Sire, he lives a good league hence
Underneath the mountain,
Right against the forest fence
By Saint Agnes’ fountain.”

“Bring me flesh and bring me wine,
Bring me pine logs hither.
Thou and I will see him dine
When we bear him thither.”
Page and monarch forth they went,
Forth they went together,
Through the rude wind’s wild lament
And the bitter weather.

“Sire, the night is darker now
And the wind blows stronger.
Fails my heart, I know not how,
I can go no longer.”
“Mark my footsteps, my good page.
Tread thou in them boldly.
Thou shalt find the winter’s rage
Freeze thy blood less coldly.”

In his master’s steps he trod
Where the snow lay dinted.
Heat was in the very sod
Which the Saint had printed.
Therefore, Christian men, be sure
Wealth or rank possessing,
Ye who now will bless the poor
Shall yourselves find blessing.